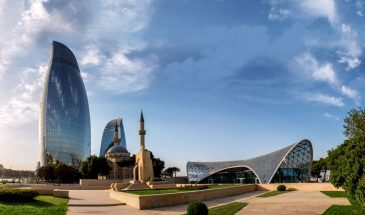 Overview Azerbaijan travel can be planned for any time of the year: winter is great for holidays in mountains resorts, summer better in…

Azerbaijan travel can be planned for any time of the year: winter is great for holidays in mountains resorts, summer better in summer for a rest in the mountains and on the shores of the Caspian Sea and in spring and autumn – to enjoy numerous sights of the Land of Fire. There are also lots of international exhibitions, and other interesting cultural and religious holidays held annually in Azerbaijan.

- Arrival in Baku (as per your flight timing). Customs will take about 01 Hour. - Our Airport Executive will be waiting outside the - - Airport with Placard. - Straight transfer to hotel. Check in to the hotel. - Free time to explore Baku - Overnight in the hotel.

- Breakfast 07:00 hrs – 10.00 Hrs - After a sumptuous breakfast start the sightseeing of Baku. - Memory Alley ‘Shehidler Khiyabany’: This is a memorial park dedicated to the fallen soldiers and civilians who lost their lives in the Russian Civilian War in 1918, Soviet Union’s violent crackdown on Baku in 1990, and the Nagorno-Karabakh War. Soak in panoramic views of Baku from the park. Thereafter, enjoy a walking tour which will help you to get acquainted with the history and architecture of the city. - Continue touring new Baku and exploring architecture of XIX- XX centuries. - Nizami Street: It is a large pedestrian and shopping street in downtown Baku, Azerbaijan, named after classical poet Nizami Ganjavi. - Fountain Square: Fountains Square is a public square in downtown Baku, capital of Azerbaijan. The square was previously called Parapet and is often referenced to by the same name now. The name of the fountains square derives from the presence of dozens of fountains throughout. The square is a public gathering place, especially after business hours and during the weekend. It is an attractive tourist destination with many boutiques, restaurants, shops, hotels and passage. It starts from the Istiglaliyyat Street and walls of the Icheri Sheher and stretches through Nizami Street, also called in popular culture as the Torgovaya street running parallel to Baku Boulevard. The fountains square is a location where the city authorities hold many public festivals, shows and celebrations. - Nizami Ganjavi monument: The Monument to Nizami Ganjavi, a medieval Persian poet, is located in Baku in Nizami Square, on the intersection of Istiglaliyyat, Ahmad Javad, Azerbaijan and Islam Safarli streets. The monument is a 6 metered bronze statue installed on 9 metered octahedral pedestal. The pedestal is of red Labrador, and elements of Azerbaijani architecture of Nizami’s epoch were used in its handling. There is an ornamental carving and faced bronze plates on the lower part of the monument. 7 plates feature scenes from Nizami's works, and one plate displays a memorial inscription. - Rasulzade Streets: Istiglaliyyat Street is an arterial road in the central uptown part of Baku, Azerbaijan. It begins at Gulustan Palace, located on the southern hillside part of Baku, and continues north, then northeast, terminating at the intersection of Aziz Aliyev and Mammad Amin Rasulzade Streets at the edge of Fountains Square. - Maiden Tower: The Maiden Tower also known locally as Giz Galasi, located in the Old City, Baku, in Azerbaijan, was built in the 12th century as part of the walled city. Together with the Shirvanshahs' Palace, dated to the 15th century, it forms an ensemble of historic monuments inscribed in 2001 under the UNESCO World Heritage List of Historical Monuments as cultural property, Category III. It is one of Azerbaijan's most distinctive national emblems, and is thus featured on Azeri currency notes and official letterheads. - Shirvanshahs Palace: The Palace of the Shirvanshahs is a 15th-century palace built by the Shirvanshahs and described by UNESCO as 'one of the pearls of Azerbaijan's architecture'. It is located in the Inner City of Baku, Azerbaijan and, together with the Maiden Tower, forms an ensemble of historic monuments inscribed under the UNESCO World Heritage List of Historical Monuments. The complex contains the main building of the palace, Divanhane, the burial-vaults, the shah's mosque with a minaret, Seyid Yahya Bakuvi's mausoleum, a portal in the east, Murad's gate, a reservoir and the remnants of a bath house. The palace is depicted on the obverse of the Azerbaijani 10,000 manat banknote of 1994-2006 and of the 10 new manat banknote issued since 2006. - Caravanserai: Caravanserai literally means “palace for caravans” or “palace on a trade route”. In the Middle East and Central Asia it was often a place of rest, located in unpopulated areas, to house animals and people. All caravanserais were divided into two types: open and closed. Closed caravanserais were small fortresses to repel the attack in case of danger. They were one or two storey buildings, surrounded by fortified walls. Inside, there were warehouses, stables and corrals for animals, as well as living premises. Open caravanserais were typical for cities. They were more like hotels with stables and corrals for animals. In addition there were teahouses, bathhouses, and many other buildings and facilities for travelers. - Overnight at Resort.

- Breakfast 07:00 Hrs -10:00 Hrs. - Petro glyphs Museum in Gobustan National Park: The Petroglyph Museum is a museum in Gobustan, Azerbaijan. Gobustan National Park (Azerbaijani: Qobustan Milli Parkı) officially Gobustan Rock Art Cultural Landscape is a hill and mountain site occupying the southeast end of the Greater Caucasus mountain ridge in Azerbaijan, mainly in the basin of Jeyrankechmaz River, between the rivers Pirsagat and Sumgait. It is located west of the settlement of Gobustan, about 40 miles (64 km) southwest of the centre of Baku on the west bank of the Caspian Sea. - Greater Baku and Absheron peninsula: Later take the tour to Absheron peninsula, where Greater Baku along with Baku city itself are situated on. The whole territory of the peninsula is connected with one history, culture and economy. - Ateshgah Temple: The Baku Ateshgah, often called the 'Fire Temple of Baku' is a castle-like religious temple in Surakhani, a suburb in Baku. Based on Persian and Indian inscriptions, temple was used as a Hindu and Zoroastrian place of worship. 'Atash' is the Persian word for fire. It was abandoned after 1883 when oil and gas plants were established in the vicinity, ending the flow of natural gas to the temple and extinguishing the holy fire. The complex was turned into a museum in 1975. The Temple of Fire 'Ateshgah' was nominated for List of World Heritage Sites, UNESCO in 1998.

- Breakfast 07.00 Hrs – 10.00 Hrs. - Check out - Transfer to Baku International Airport for your onward Journey. Tentative Itinerary Please Note: There might be changes to the above-mentioned Itinerary however, smaller might be but it will be aimed to enhance and optimize your experience with us.

There are no reviews yet.

This site uses Akismet to reduce spam. Learn how your comment data is processed.